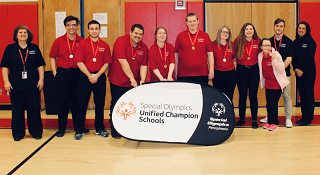 The Bocce team poses for a photograph with the Special Olympics banner coming away from their championship win.

On March 5, the Clearfield Bison Bocce Team competed for the championship title against three other school districts. On the eve of the big match, the Bocce team geared up and practiced in hopes of preparing to defeat their past rivals.

After the practice, the team walked into the championship with confidence. Dr. Spaid, a coach to the team, offered that after the afternoon practice, she too was confident in the players, their abilities, and their determination to win. She said that the practice showed team unity that forged her excitement for the match to come.

As the championship hosts, the Bison Bocce team had high hopes for a victory. After the torch was carried in by School Resource Officer, Officer Marshall, and Kimberly Wilsoncroft and Shaylee Sharp from the Clearfield Team, the match was ready to begin.

The first match up for Clearfield was against their past defeater, the West Branch Warriors. The Bison Bocce team played a close match, but conquered the court with a win in the frame.

Their second competitor was the Curwensville Golden Tide, who they had previously defeated during the regular season. During the match, the Bison managed to pull some of their greatest moves of the season. The team won the frame with a generous lead and were the reigning victors of the day.