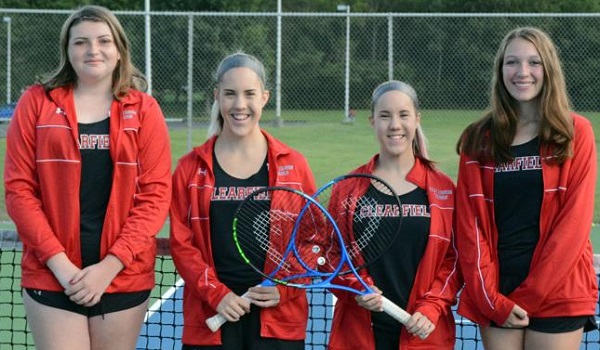 The Clearfield Area Junior-Senior High School has many competitive sport activities. The girl’s tennis team had already had a strong 10-1 season. They then moved onto districts with competition from E.C.C, which the girl’s team had previously beaten 5-0, then to St. Marys where they lost 4-1 and managed to place second overall.

“We were able to practice a few days before districts, but we were rained out a few days also. We had a good idea of the players we would go against in St. Marys but we only knew a few players from ECC from other competitions this year,” Coach Spence explained.

“We were the second seed in the playoffs and hosted ECC and then played the district final versus St. Marys in Elk County,” said the coach.

The top player for the team was Kylie VanTassel, followed by Lindsey Kerling, and Ally Gaines respectively. The three of them won the team a multitude of matches during the season.

“It’s certainly the highest in my tenure as the head coach, I am not sure if it is the best in history or not officially, but it was we finished the season 10-1 and the postseason we went 1-1. 11 wins this year is awesome!” Coach Spence stated.

The team knew from the beginning that St. Marys would be a difficult challenge, and they did not let the fear get to them and practiced hard and played well. Many felt lucky to have a season during the pandemic.

“I knew we had a special group when summer workouts began and they showed up ready to go from day 1 and challenged each other all summer,” according to Coach Spence.

When asked about the girls tennis team moving forward, Coach Spence said, “We will definitely miss those seniors graduating this year, but we will have players back next year who will hopefully take after this year’s seniors and put the time and effort in during the offseason to improve their individual games.”