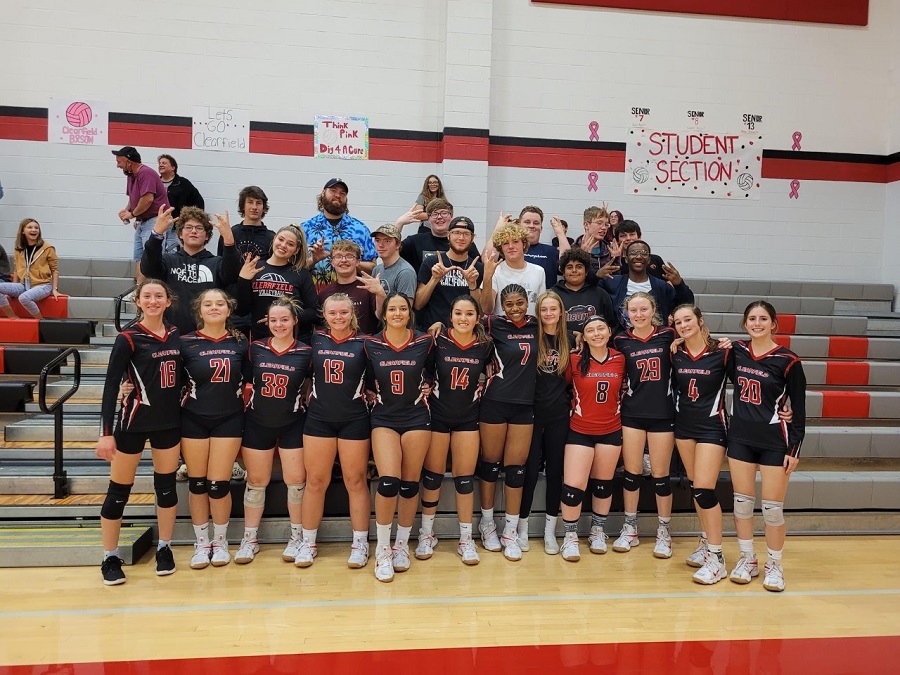 The volleyball team shown with the student section.

Dig For a Cure is a fund-raiser used to raise money for breast cancer and other forms of cancer. Dig is a word used in volleyball, meaning a hard hit from an opposing player. Then, the defensive player “digs” the ball up to play, meaning that defensive player is fighting to put the ball in play for an offensive play. This fund-raiser and everyone involved hope that all people battling cancer have that fight to get through their treatments and to survive, says Clearfield volleyball coach Sandy Bailor.

The volleyball team hosts the annual Dig for a Cure because they feel it is important to give back to the community for all that they do. They also believe it is very important to help individuals and their family’s fighting cancer. They try to ease some of their worries while they are in treatment, says Coach Bailor.

This year the volleyball team is making their donations to the Clearfield County Cancer Group. This organization helps any Clearfield County resident battling with cancer. The money raised this year will benefit several individuals. They will receive help with gas, bills, food etc. This gives them one less worry while they are getting treatments. Other activities that were in this fundraising included: selling ribbons, baskets, and 50-50’s. All together the volleyball team ended up raising $2,235.00.

Coach Bailor explains that she believes that the girls learned the importance of helping someone even though they might not personally know that person by participating in this fundraising. She also explains that there may be a day where you may be in the same situation and how nice it would be to have someone help you.